Donate
Become A Member For FREE
Become A Sponsor 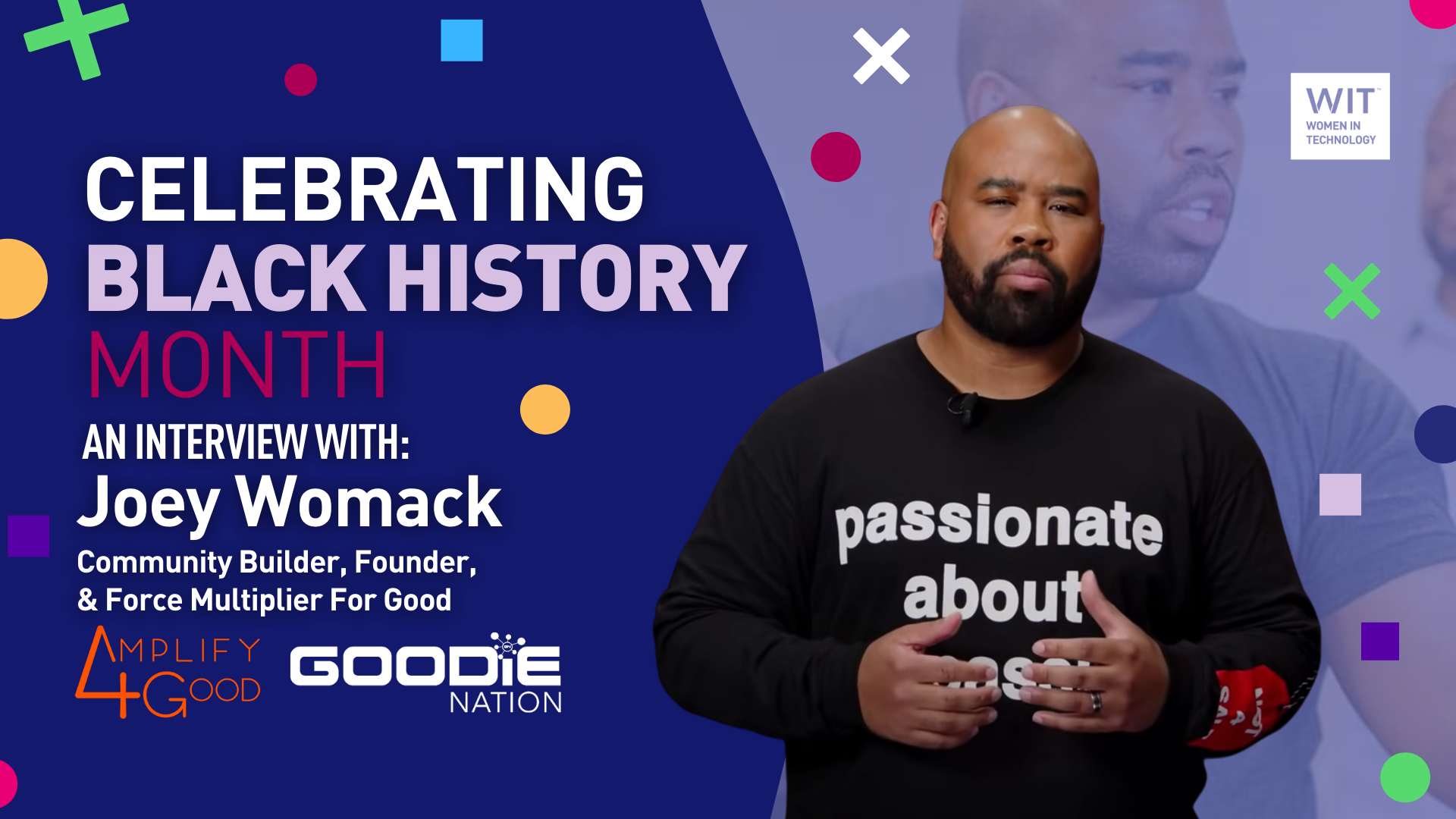 Throughout February, Women In Technology plans to highlight prominent black leaders in technology within the Atlanta area. These leaders, STEM/STEAM role models, and technology trailblazers share with us the meaning of Black History and how their contributions today will reach the next generation.

WIT had the pleasure of speaking with Atlanta community builder and founder, Joey Womack.

Womack is the founder and CEO of nonprofit Goodie Nation whose initiatives are designed to close the relationship gap for tech-focused social entrepreneurs and diverse founders.

Womack received multiple industry accolades for his commitment to and work in bridging socioeconomic disparities. He is the recipient of awards from SOCAP Global, the Technology Association of Georgia and Startup Atlanta. He was included in Atlanta Magazine’s list of 500 Most Influential Business Leaders and Huffington Post’s Top 20 Innovators in the Atlanta Tech Startup Scene.

He serves on the boards for Startup Atlanta, Venture Atlanta, and the Georgia Social Impact Collaborative as well as advisory boards for SXSW and SOCAP’s Spectrum Conference

Q: Tell us a little bit about who you are and what you do in the tech space.

A: “I’m Joey Womack, a force multiplier for good, kind of a community builder, ecosystem developer by genetics. I’m on a mission to help 1 billion people by the year 2039 and I plan to accomplish that in several different ways. The primary way is Goodie Nation, my nonprofit that focuses on closing the relationship gap for tech-focused social entrepreneurs and diverse founders. I also run a company called Amplify for Good, a for-profit that does hackathons, innovation labs, and design thinking programs, for large companies, typically around areas involving diversity inclusion. Lastly, I am the co-founder of Atlanta Black Tech.”

Q: What does Black History mean to you?

A: “You know, I think it’s an opportunity for us to stop and reflect on the Africans who were slaves in this country and their descendants who have gone on to do crazy amazing things. Despite a plethora of obstacles or in many cases near impossible circumstances our descendants overcame. They’ve gone on to do amazing things, which actually is a real testament to their talents and their resilience to many other things.

Black History Month is an opportunity for us to honor those that are famous, but also a time to think about the individuals on an everyday level that had that same level of talent and resilience. They may not have had the opportunity to display this talent, but they still are really good and have made a difference on a local level.”

Q:  As a prominent leader in the tech space, how do you feel that you’re inspiring the next generation of black tech leaders?

A: “I don’t know, you know, if I’m inspiring or not. What I think I can hope to do, quite honestly, is to set an example and create a process that works as it relates to bringing people together and creating connections that matter. The hope is that this process or the framework or a model can be used years in the future. I do know, we have evidence that the process works and so the hope is that it can be taken and replicated by people for decades to come.”

Q: Is there a black leader from history who has inspired you? And why?

A: “I’m really big on the everyday people that create big change that may not have had the press or the attention that they deserve. The first thing that comes to mind is a woman from my mother’s old neighborhood in Montgomery, Alabama. The neighborhood is called Centennial Hill, which is where Martin Luther King Jr. lived when he was at Dexter Avenue Baptist Church. Right down the street, we’re not talking like down the street, like in Atlanta. I mean, literally down the street, maybe 7-10 houses down. Claudette Colvin, who is still alive today was the predecessor to Rosa Parks, was a teenager in Montgomery, Alabama who refused to give up her seat. Because she was 15 years old at the time and pregnant, they decided that she wasn’t the best person to tell her story and ultimately would use Rosa Parks. But an everyday person, Claudette Colvin, lived literally right next door to my mother’s aunt, which is a few doors down from my grandmother, my mother’s mother. If it were not for Claudette and her bravery, the Montgomery Bus Boycott doesn’t happen and all of the movements after that wouldn’t have happened either.”

Q: What’s one thing you would want others to know about Black history?

A: “That’s a good question. One thing I would like others to know about Black History is that you matter. You know, and I hate to label it, maybe this doesn’t sound the most appropriate or sounds bad. But it’s not necessary, like Black Lives Matter, it’s that you as a person, matter. Your story matters and you have a role to play in creating the change that we all seek. I truly believe that everybody has a role to play, whether you are “famous”, you’re popular on social media, you’re in the press, or whatever, that you have a role to play, whether you really believe so or not. You have the opportunity to plugin and create a difference. It could be small, again, air quotes, it could be large, but just know that small things do lead to big change, just like with Claudette Colvin.”

Women in Technology would like to thank Joey Womack and Goodie Nation for taking the time to share this information with our community.

Be Part of the WIT Movement and join our community of technology leaders, professionals and students TODAY!
Membership with Women In Technology is FREE
Join the WIT Community

Login
Donate
Back to top